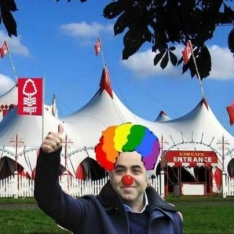 Another meagre season over, another term outside of the Premier League to come. That doesn’t bother me though, we haven’t been up there since 1999 – a fact that a lot of Forest fans seem to forget. But what does annoy me is the actions, and bizarre rhetoric that flows from owner Fawaz Al-Hasawi. And the fact that he’s held in such high regard by a good portion of our supporters. But the truth is, since his arrival; Nottingham Forest Football Club has become moribund…

It’s been three years since Al-Hasawi – a self-claiming ‘lifelong Forest fan’ (who initially, allegedly, tried to takeover at Leeds) bought the club. He does have experience of running a football club, whilst owning Qadsia SC who, admittedly, were successful under his stewardship – winning two league titles. But the standard of the game in Kuwait, compared to here, is a totally different beast altogether; picture the standard of Scottish football, but with less cholesterol!

He took over on the back of a drab year at the City Ground; our owner and (genuine) lifelong fan of the club, sadly passed away a few months earlier. We’d also been in a relegation battle all season and it seemed that, due to funding a previous manager’s failed promotion push, we had run out of money. At that point, it looked like we would only go one way. When the takeover was complete, the usual spiel followed; He was going to move the club forward, take us back to the Premier League, and all the rest of it. Success was coming, he said. I have no problem in admitting that I was initially enthusiastic about the future possibilities for my beloved club, the Al-Hasawi family has a reported wealth of over a billion quid. So what football fan wouldn’t get a bit excited about the thought of their club “doing a Man City”? I know, against modern football and all that, but we’d all take it, wouldn’t we?

The reality is though; it takes more than just wealth to successfully run a professional football club. He has put a lot of money in, granted, but where exactly has it gotten us? For a start we’re currently under a transfer embargo for breaching Financial Fair Play rules. As a football club chairman, you should have an understanding of the rights and wrongs within the laws of the game. FFP is complete bollox though to be fair, but that’s a rant for another day. You can blame the managers until the cows come home, but who was signing the cheques? It’s not like the money was being spent without his consent. Have we even paid Peterborough United for Assombalonga yet, though? Then of course there are all of those manager pay-offs. Billy Davies was given a big contract extension, on the say so of his weird uncle (or whatever relation he is), so his sacking cost a fortune and it all adds up.  And if he decided to leave, which he has threatened to do recently, he’ll want that money back. Where will that leave us?

I’m not one of those fans that demand instant success, far from it. But I want to see evidence of us building for the future, because that’s what was promised. Or at the very least, becoming a stable Championship side. But his reign so far has shown the opposite. The three seasons under his control, we have finished 8th, 11th and 14th – in that order. Now, I’m no mathematician, but that proves that we are moving three places backwards, every season. There is absolutely no debating it and I would love to see his disciples guarding that record! The problem is, some Forest fans will defend him to the hilt, purely because they believe he is our ticket back to the big time. I’d imagine that is solely down to his wallet though, because no one is that deluded.

Last season, club legend Stuart Pearce, was brought in and did a fantastic job clearing up the mess left by Davies and his slippery half-brother. Al-Hasawi even hired a chief executive, had the penny finally dropped that he wasn’t up the job himself? Things started to look like they were on the up, until the owner, in his wisdom, sold two players without the knowledge of the manager. But that aside, we went into the new season smashing it. But of course, after a few wins, certain individuals expected us to win the league by Christmas. So, naturally, the good times didn’t last. The Chief Exec’ wasn’t allowed to do his job without interference, so he abandoned ship as well. Al-Hasawi’s answer to all of these problems? Dougie Freedman! That man should never have been appointed, in any situation. Aside from the fact he’s just not a good manager, as proved by his stints at Palace at Bolton – and their fans will verify that fact – this is a man who, just a few months earlier, was rubbishing the club in the press and calling for us to be docked points. You just wouldn’t touch him, would you? It’s like Jamie Ward gobbing off about us to the papers, not long back. Imagine then going on to sign him… oh, wait. He’s basically appointed the only manager who was desperate enough to come here and allow himself to be manipulated.

Admittedly, Freedman got off to a flyer. The standard new-manager bounce was in and we won a few games. Excuse my cynicism though, but I wasn’t convinced, looking at the bigger picture. We mainly only beat lower-table opposition. The win against Boro was a great result, but the Bournemouth win that everyone bangs on about; they were in torrid form and had lost four or five games in a row. So it’s not like we were special. A lot of supporters bought into him quite quickly though. Sure, he said all of the right things, but most managers do. He was hardly going to come out and say what he really thinks about us, was he? The honeymoon period didn’t last long of course, and then it was time to see what he actually can do as a manager. Tougher fixtures came, and with them came defeats. And with them defeats came the excuses: “We were tired from climbing the table”. I don’t know whether to laugh or cry at that gem. Even if it wasn’t a completely bizarre excuse for losing a football match, you actually do have to climb the table for it to be feasible. He then claimed that he’d saved us from relegation. We were 12th when he came in. We finished the season 14th – our lowest place all season. What a footballing genius. And how did the owner react to this poor display? With a fucking contract extension!

Our season was officially over with about a month to go. In that case, why would you play loan signings that have no future at the club? Freedman’s been bleating on about needing a pre-season, so why not treat the remaining games as friendlies and concentrate on the players who will be with us next season. We’ve got a plethora of promising youngsters coming through, so give them an outing! In league fixtures you’d get a much better idea of how they’d perform in competitive games, and a great display against Ilkeston Town’s finest won’t prove much. Another argument that makes no sense, is that Pearce was “useless” because “this squad should be near the top”, but Freedman should be given time to bring in more players before he’s judged? Why would he need to, if the team’s good enough as it is? The hypocrisy is mind-blowing. One thing is for sure, I am looking forward to hearing what excuses he comes out with next term. I really can’t wait.

So, where does it all leave us for the future? This transfer embargo means we can only sign free agents, on no more than ten grand a week in wages. But as “this squad should be near the top” that shouldn’t be a problem, should it. Following the current trend, we should finish 17th this year, and quite frankly, I can’t see it being much better than that.

For me though, off the field, things look just as bleak. All that Al-Hasawi’s ownership has shown us so far is; he’s obsessed with social media, even going as far as getting a “TWITTER” reg plate for his motor. I know some say that he just wants to be loved. But didn’t Dennis Rodman say the same thing about Kim Jong Un? Although I bet even Kim probably has a stronger knowledge of football. Oh, and his mum likes Forest. Maybe she likes Leeds too? He did put two big tellys in the City Ground though. But they’re probably on tick from Rumbelows. But it’s not yet too late for him to change his ways, even Vincent Tan seems to be making amends at Cardiff. But I just can’t see Al-Hasawi ever trying to do the right things. Apparently he’s even sent his Lady Gaga-loving son on a coaching course. I’m getting palpitations at the thought.

I have nothing against optimism, if it’s warranted. But, basically, we’re no better off since his arrival, and we seem to be going only one way. I’ll love Nottingham Forest – the football club, until the day I die. But with the collective of clowns that are in charge at this moment in time, it’s hard to give a shit.