This is basically going to be a rant. You wasn’t expecting anything else from me, right? If you’re a Posh fan and you follow me on Twitter, you’d have seen my argument with the chairman – which resulted in me calling him a ‘tit’. Too far? No, not in my opinion. He earned it…

I’ve always been a big fan of Darragh’s. He’s a very good chairman. However, I’ve sensed a change in attitude in recent months, which given the dire state we are in, is entirely understandable. I still think he’s hurting from that day at Selhurst Park. He financed and, let’s face it, helped build that fine squad. To be relegated on the last day of the season, with a record points total, must have rocked him to the core.

“I don’t want a new owner unless they have a sexy amount of oil money” was a tweet that made the big Irishman have a pop at me. He said that I talk shit about him elsewhere, yet I’m “nicey-nice when I tweet him personally”… Bull shit. I’ve slagged Posh off many times, I think we are incredibly tin pot and at times quite frankly embarrassing. Cringey hashtags and motivational videos – I’m old school, I hate all that shite.

Darragh took my criticism of Posh personally – I may have claimed that we played garbage a few times on a podcast, but what fan doesn’t have a groan? He claimed that I no longer deserve replies from him, like he’s the fucking Queen or something. If you can’t tolerate other people’s opinions, then Twitter isn’t the place for you. Numerous club-staff have unfollowed me on social media along with the official club account. I’ve obviously rubbed them up the wrong way, but who cares, I shall continue living that thug life! 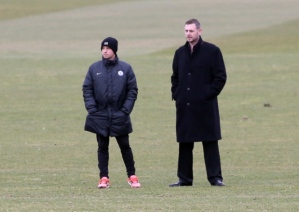 Let’s talk football (well, if it can be classed as that). As I write this; Robbo has been sacked following a dreadful 2-1 defeat away at Southend – live on the telebox no less! We were never in it, despite the scoreline. This game for me confirmed a lot of worries I already had – that group of players didn’t respect Robbo, not one bit. Answering him back when he’s dishing out instructions and squaring up to each other, what kind of team spirit is that? Word has it that Robbo wanted to enforce a lot more ‘military-style’ exercises, but given his marine background, you’d expect that. However, he was told by the Posh hierarchy, in regard to a rope-climb drill that “not everything can be solved with the army approach”. Which is probably true, but my god, I’d love to see our mob of pretty boys climbing up that rope. I personally think Robbo would be better off as a fitness coach, which is something he knows well. I don’t think he’s a football manager. Hopefully he goes on to prove me wrong.

The football he got us playing was very stop-start; chipped balls into the front two. Which is utterly pointless as all Conor Washington does is run about like a headless chicken for 90 minutes. And Joe “The Goal” Gormley… well, doesn’t score goals. Yet – I do believe he will come good eventually. The standard of Irish football is pretty poor. It’s part time over there, we can’t write him off yet, no matter how frustrating he is to watch.

In regards to our next manager, I’d like to see Darragh be ambitious and go all-out for Jimmy Floyd Hasselbaink. Or even better, Brian McDermott. Even someone like Ian Holloway – I’d take a real personality to shake things up a bit. I think it’s safe to say It’ll be Steve Evans though. I’m not sure about him but I like the fact that he’s a Posh fan and classes us as his “dream job”. I’ve spoken to a few Boston United fans though who didn’t have a good word to say about him. This is a manager who got their club into the football league and they hate him? That stinks if you ask me. Apparently he contributed to their demise and relegation from the Conference. Dodgy character indeed. Can you have Barry Fry and Steve Evans at the same club? Imagine that! As long as they get results though, I don’t care who it is. I’ll back the new manager and Darragh as a fan, like I always have before. I’d keep Grant in his assistant role, he’s learning his trade.

As I look at our squad, on paper, we could scrape 6th. A goalscorer away from a crack at the top two. However, as the saying goes; ‘football isn’t played on paper’. But I really do think that with the correct man at the helm we can make the play offs this season, at a push. Bring on the next chapter in the club’s history! Up the Posh!