The decision to hold a World Cup was first made 90 years ago on this very day. On May 28th 1928, then FIFA (pre-corruption) president Jules Rimet decided to arrange a football tournament that could rival the Olympics and invented the World Cup.

Due to be held in 1930, Uruguay were given the honour of hosting the inaugural event, as they were the current football gold medallists, having beaten Argentina two years earlier in Amsterdam. It was also to celebrate their centenary of independence.

There were no qualifying rounds for the first World Cup. All teams that were part of FIFA, alongside the home nations who, at that time weren’t part of the federation (simpler days, no doubt) were just invited to take part. But due to the obvious barriers for travelling to South America in 1930, no European team put themselves forward for a place. Eventually Belgium, Romania, Yugoslavia and France all relented and sent their teams across the pond, to join seven South American nations, Mexico and the United States. 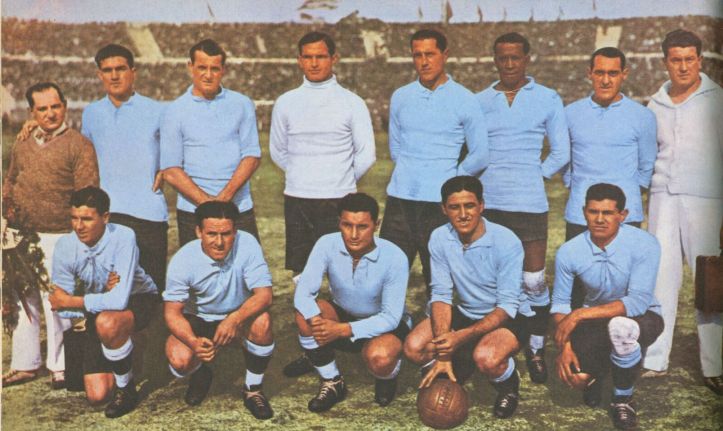 The thirteen teams taking part were split into 3 groups of 3, and 1 group of 4. The 4 European nations were kept apart, as France were drawn against Mexico, Chile and Olympic silver medallists Argentina in Group 1. Yugoslavia were placed with Brazil and Bolivia in Group 2, Romania were pitted against Peru and hosts Uruguay and Belgium were grouped with Paraguay and the USA in Group 4. There was only 1 qualification place per group, as the next round went straight into the semi-finals.

On the 13th July at 15:00 the first every World Cup games kicked off. The United States went up against Belgium whilst France took on Mexico, and France’ Lucien Laurent volleyed himself into the football history books, breaking the deadlock and scoring the first every World Cup goal in the 19th minute, in front of just 4,400 spectators. Laurent would never capitalise on that historic moment, as he mainly played as an amateur, and was later captured by the Germans in World War II.

France went on to beat Mexico comfortably in a 4-1 win, but later lost both other group games, eventually finishing 3rd, whilst Argentina topped the group after winning all 3 of their first round fixtures, including a 9-goal thriller over Mexico, who finished bottom of the group. Chile won their first 2 games, but lost out to Argentina in a decider – who would face the USA in the next round. The ‘States beat Belgium and Paraguay, the latter being a 3-0 with Bert Patenaude bagging all 3 goals – claiming the World Cup’s first every hat trick. 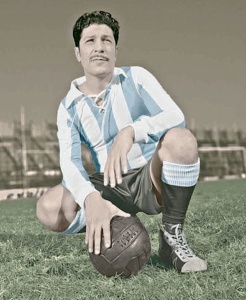 In Group 2, Yugoslavia were the only European team to earn a semi-final place, winning both of their games, 2-1 against Brazil and 4-0 over Bolivia. Brazil also earned a 4-0 victory over their South American neighbours, but it was a meaningless game, as Yugoslavia had already qualified 3 days earlier and would go on to meet hosts Uruguay, who topped their group with wins over Peru and Romania in a 4-0 offering, in front of 70,000 fans – which was a huge contrast compared to Romania Vs Peru, who only drew 2,500 through the turnstiles.

The first semi-final kicked off on July 26th, as 72,800 spectators witnessed a fiery encounter, as USA’s Raphael Tracy suffered a broken leg in the 10th minute. Argentina turned over the USA, who had been impeccable up until that point. But the Argentines were far too strong for the Americans; leading 3-0 up until the 80th minute, where they would score another 3 times, before USA’s Jim Brown of the New York Giants scored a consolation goal. Brown would later sign for Manchester United and Tottenham, but only played for his country once more, in a friendly game.

The next day, Uruguay and Yugoslavia went head-to-head for a place in the final, in front of 79,000 fans and the outcome of this match could’ve been very different as, at 2-1 down, Yugoslavia grabbed an equaliser, but it was dubiously called offside. But Uruguay would then go on to replicate the first semi-final with a 6-1 victory, despite going behind in the 4th minute. A Jose Pedro Cea hat trick helped the hosts earn their place in the final.

There was no 3rd place play-off in the 1930 World Cup, as both Yugoslavia and the USA were handed bronze medals. Despite that, both nations’ Football Associations would claim themselves as the sole holders of the 3rd place finish. With the modern method of the world rankings, the USA would’ve been in 3rd place, but Yugoslavia believe they should have finished 3rd, because they lost to the tournament’s eventual winners.

The first every World Cup final took place on 30th July in front of 93,000 at the Estadio Centenario Montevideo stadium. In an all-South American encounter, host nation Uruguay went up against Argentina, which would be a repeat of their Olympic final 2 years earlier. There was trouble before the game, as all supporters were searched for weapons, and Belgian referee John Langenus only agreed to officiate the match, if there was a getaway boat waiting for him at full time. There was also a dispute between the 2 nations’ officials over whose ball would be used. A compromise was made, and each side would use their own football in either half. 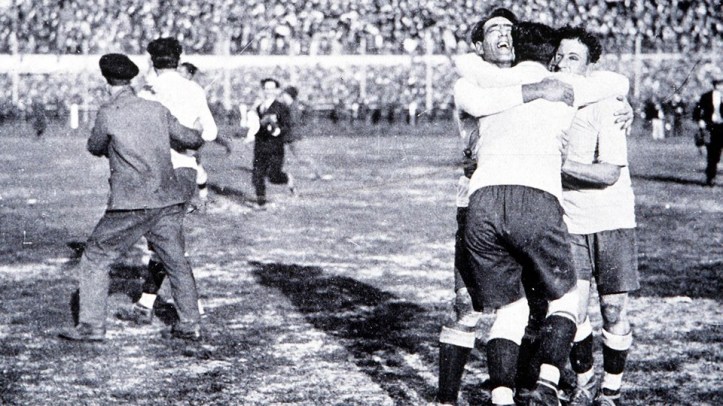 Uruguay took the lead through Pablo Dorado but Argentina went into half time in front, as Guillermo Stabile grabbed the Argentine’s second goal of the game, and his 8th goal of the tournament – which earned him the golden boot. In the second half, Uruguay threw everything that they had at Argentina and equalised 10 minutes after the break, and re-took the lead 10 minutes after that. The score would remain 3-2 until the last minute, when Hector Castro made sure of the win. FIFA president Jules Rimet presented the trophy, which would later be named after him, and the next day was declared a Uruguayan national holiday, as Uruguay celebrated being crowned the first ever football champions of the world.